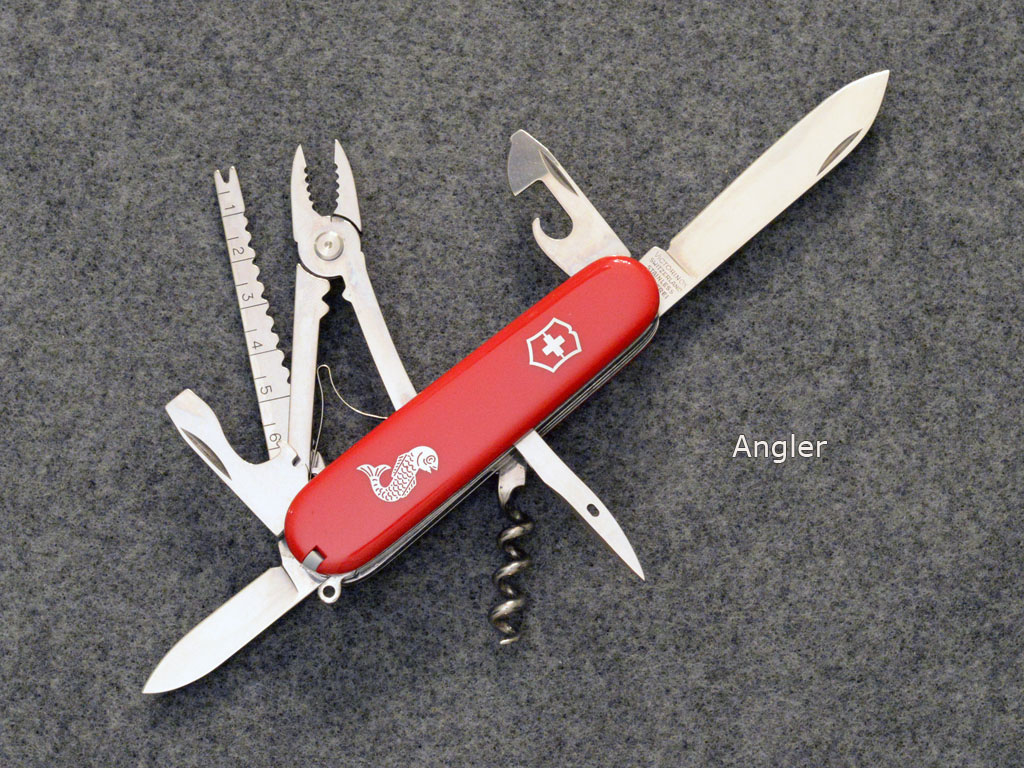 The Victorinox Angler is a 91mm Swiss Army Knife with four tool layers, featuring a fish scaler and a corkscrew on the backspring. It comes in standard red Cellidor scales that are adorned with a metal inlay of a fish.
The current version contains the pliers, however the original version had scissors - See History.

The five-layer Deluxe Angler, also known as the Waterman, adds the scissors and hook to the Angler and was an older model, also sporting the fish inlay.
The Angler Plus adds a wood saw to the Angler and was a less common model.
A much older five-layer variant also exists, adding the metal-file/saw to the original scissors-based toolset.
These models/variants are no longer available.

The original configuration of the Angler replaced the pliers with:

The Deluxe Angler adds the scissors to the Angler creating a five-layer model.

Current versions have the standard red synthetic scales. Some early versions had blue scales and are highly collectible.
The fish image was originally a metal inlay, which later (date???) got converted to be printed.

* SABI = Swiss Army Brands Incorporated - The former importer and distributor for Victorinox in the USA.

The original Fisherman  model was available with a corkscrew or a back-side Phillips. The corkscrew variation later became known as the Angler  (featuring scissors), in the early 1970s. Please also see the Fisherman page for more information on the evolution of these fish-scaler models.

This original Angler configuration was still in place in the early 1990s, several years after the introduction of the pliers with the SwissChamp in 1986. In the 1992-1994 time frame, Victorinox also made a version of the Angler called the Angler with Pliers. This knife included the pliers, as well as the scissors, implying that when this tool was made, the 'scissors' Angler configuration was still in production and the pliers were the add-on tool. This dual configuration is now usually known as the Deluxe Angler or Angler with Scissors.

The modern Angler configuration/naming with pliers as standard was introduced later, and this four-layer model is the only one currently (2020) available.