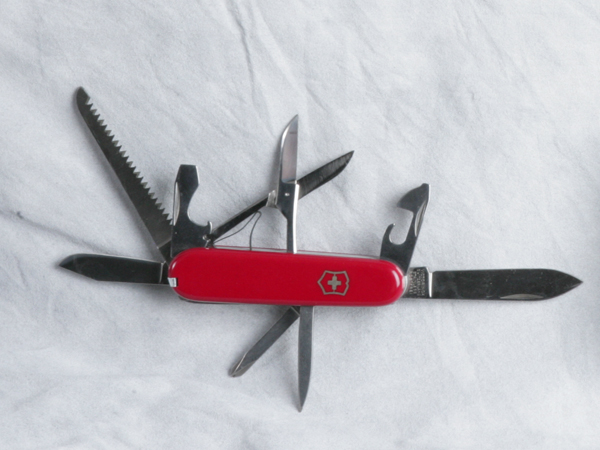 The knife commonly known as the Artisan (also known as the Fieldmaster - Small), is an 84mm Victorinox knife with four tool layers and the same basic tool selection as the larger 91mm Fieldmaster.

Name Disambiguation: This model was originally named the Craftsman (in some markets?), and numbered 136ka, before the Craftsman name was reused for the 91mm six-layer model circa 1973. See History below.

The name Artisan has appeared stamped on the knife box, indicating it was the proper name used in some markets. A 1976 US Distributor Catalog reference was found for this model with the name Artisan, this name also appears in a 1980 Canadian Distributor's catalog from SMICO, but not for the identical model (which could be just a common catalog error).

Versions with the older single-leaf scissor spring, are also known.

Historically the naming of the different Swiss Army Knives has been inconsistent, since initially Victorinox itself did not give them names.
It seems like the various importers named the different models to make it easier for sales and marketing. At one time the Craftsman name was applied to the equivalent model in the 91mm size, even though today we use the name Fieldmaster. At least one reference reports the use of the Craftsman name for this smaller model as well. Additionally, at least one example of a early 1950s knife was located in the appropriate box for the period with the name Craftsman, Tang Stamps: Armee Suisse / VICTORIA; Can-opener with US PAT PEND. - see image above/right.
Name references are also often incorrect as dealers and distributors themselves make errors, given all the different models and their similarities.