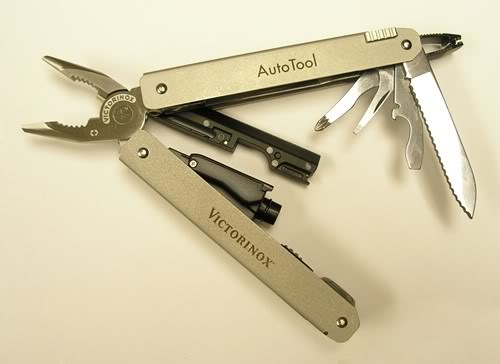 The AutoTool is a plier-type multitool which includes features designed specifically for motorists.
It uses the same plier jaws as the regular SwissTool, but the overall tool is longer, thicker, and considerably heavier.
All of the blades and tools on the AutoTool fold from the outside of the handles, allowing easy access, without opening the pliers. This arrangement also makes for a more comfortable feel to the hand when using the pliers.

The AutoTool has four 'regular' Swisstool tools, all located in one handle:

All of these tools lock open securely, and are tensioned by means of the same style individual backsprings, as seen on the SwissTool.

It also features the Swisstool's:

The really defining feature of the AutoTool is its specialist tools. In one handle there is a:

and in the other an:

The AutoTool specialist tools are all made from black plastic and were produced in China.
The very nature of these devices gives the AutoTool its unusually large size and weight.

Many AutoTools suffer from damage to the ice scraper blade, caused when the user failed to depress the liner lock when putting the scraper away.

The handles of the AutoTool are made from bead-blasted stainless steel.
Unlike many other plier-type multitool handles, there are no inch or metric scale markings.
The words VICTORINOX and AutoTool are chemically etched onto one side.

The original AutoTool contained a can-opener, but later in production a long 2mm screwdriver replaced the can-opener (see picture below), probably because it was felt a screwdriver was more appropriate for an automotive tool than a can-opener.
The model with the can-opener can be seen in the manual that was published to accompany the Autotool.

The AutoTool was originally introduced in 1999. It was marketed as one of Victorinox's Lifestyle tools, a group which also included the SportRatchet, the Golf Tool, and the CyberTool.
Due to its large size and weight, the AutoTool was not very successful. It was no longer listed on the Victorinox website just a few years after its introduction.

The AutoTool, together with the SportRatchet, was put together by the Lacey Manufacturing Company of Bridgeport, Connecticut, on contract for Swiss Army Bands Inc. (SABI) then in Shelton, Connecticut. The Lacy company was responsible for making the branded side plates (scales), and assembling the various parts using the "orbital riveting process." The steel blades and plastic parts were consigned by SABI from abroad.
At one point, the company made a special prototype of the AutoTool with highly polished handles, but SABI rejected it claiming the cost was too high. SABI stopped ordering both the AutoTool and the SportRatchet, probably because of their weight and the numerous returns, especially of broken Ice Scrapers on the AutoTool.

The AutoTool was probably intended primarily for the American market since the digital tyre pressure guage is calibrated in pounds per square inch (PSI) instead of the metric kilo Pascals (kPa). Its display is activated by a small battery, that unfortunately cannot be replaced, another possible reason why the AutoTool was discontinued.

Although it is considerably larger, the AutoTool shares many features with the original Victorinox SwissTool.
Both multitools use the same plier head, as well as the same blade locking mechanisms, standard/regular tools and outside opening blades.