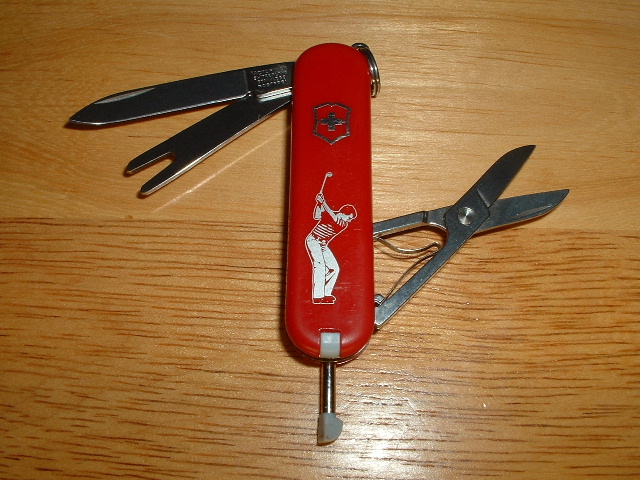 The Caddy is unique model made specifically for golfers. It features a small divot repair tool, and a ballpoint pen.

Normally supplied with standard red Cellidor scales.
Many custom scales were commissioned, in various colors, that had golf course, or tournament, names and logos.
Some models featured a golf figure imprinted on the front scale - See image above.

Some models replaced the scissors with the cap-lifter/combo tool/with SD tip. Technically this is a different model, but does not have its own page at this time.

Initially supplied with a removable pen. which was later replaced with a retractable pen. It may have been named Caddy II, or just kept the name of the original.
In 2012 the Caddy was reincarnated with some changes. The pen was replaced with the toothpick and there was no print of a golfer on the scale. It was produced in four colors: red (53711), blue (53712), black (53714), and green (53715).