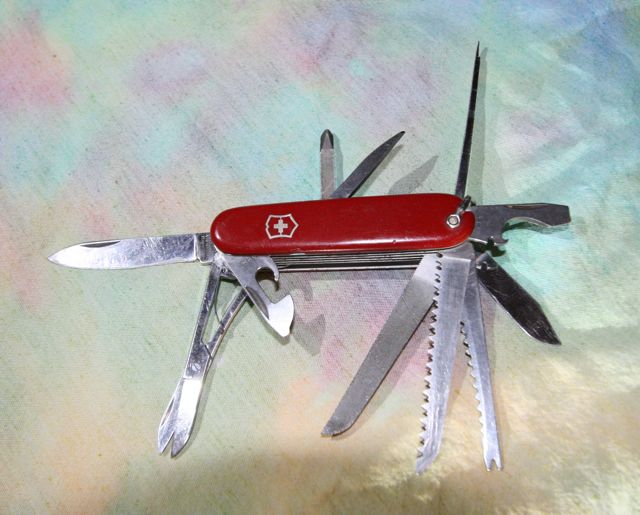 The Champion was the flagship model of the Victorinox 91mm line, from 1952 until roughly 1986 (late 1985) when the SwissChamp was first released in Switzerland. It contained all the main 91mm tools that were available at the time of production.
Since this model was the top-of-the-line for many years, it evolved with the changes to the tools. Over the years, the tools included in the knife, and the tool versions, changed, based on the current tools being manufactured at the time ... however it retained its name.

Another change to normal naming conventions was that models that included the backspring Phillips screwdriver, as well as those that included the corkscrew, were both, somewhat confusingly, referred to as a Champion. Typically models would have different names for this tool change.

Six-layer Models
The early models had six tool layers and included a long nailfile on the back.
The Corkscrew/Phillips versions are referred to as the 'Champion a/b' respectively in the SAKWiki pages.

Seven-layer Models
The most significant change to the Champion was the introduction of a new tool layer in 1973, consisting of a magnifying glass and the in-line Phillips screwdriver.
This model is referred to as the 'Champion c' in the SAKWiki layer pages, and Related Tools sections.

The Champion was the top of the range 91mm Victorinox Swiss Army Knife, containing all the tools Victorinox produced at the time of manufacture, until it was replaced as the top model by the SwissChamp in 1985.

Note: Initially models were just known by their product codes. Descriptive names such as Champion were introduced from the 1950s. In the mid-1970s Victorinox changed their model numbering convention and standarised model names across the globe. The six-layer Champions in the Identifiers section below have the old numbering format, the seven-layer models follow the new format.

Over the years the tools included on the Champion have changed and the tools themselves have evolved, so there are a number of slightly different tool configurations. Versions with the long nail-file are usually actively sought by collectors.

The Champion was still offered and updated after the release of the SwissChamp, it just did not have the same prominent position in marketing. The seven-layer model eventually evolved into the Champion Plus was still produced for several years - Although as of 2017 appears to be withdrawn.

For active discussions and images regarding vintage/older Swiss Army Knives, check out this thread, at the MultiTool.org Swiss Army Knights forum.