The Victorinox Champion Plus is a 91mm knife with seven tool layers and four tools in the scales.
It includes all of the tools in the SwissChamp of the same time period except the pliers.

Appears to be discontinued (2016) - although there was availability beyond that date from some channels. 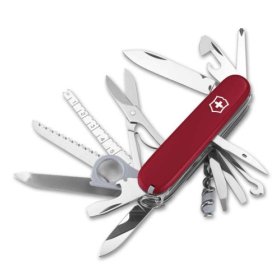 This model was first introduced in 2003 or 2004 and had the same main toolset as the earlier Champion model. It is possible it was initially sold exclusively through the 'WalMart' chain. The first versions contained the original Magnifying Glass, did not have the 'Plus' scales (no pen or straight-pin), and had the crossbow and cross on the tang.
By 2005 Walmart was clearing them out at bargain prices and knife seemed to be unavailable late 2005 through 2006, but reappeared in 2007 via a few dealers. In 2009 this model was still available, but there were some indications that supply was running out, however, this is speculation based on price variations.
During 2015 this model was still available and is quite popular with users who prefer to carry a Swiss Army Knife without pliers, perhaps as they also carry a pliers based tool.

The .R designator of the model number1.6795.R   indicates they were, at one time, or are, a special run. That might explain the good pricing that was available, although it seems like the run was quite large. Note that the base model number 1.6795 is the designator for the SwissChamp model.

This model is discontinued (not in the catalogue) as of 2015.