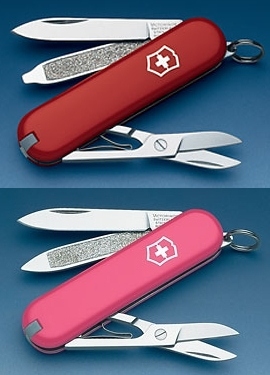 The Victorinox Classic is the most common Swiss Army Knife worldwide, and is considered the standard (or base) 58mm model.
It comes in two main variations - The Classic, which has a nailcleaner tip on the end of the file (bottom photo) and the Classic SD (top photo), which has a ScrewDriver tip on the nailfile tool. The Classic SD is often referred to as the Classic, although technically it is a (if not the more,) common variation.

The Classic is available in an extremely wide range of colors and handle materials. It is also a very popular model to be branded with a company logo.

There are a number of other 58mm knives with the same main tool configuration. However, as a general rule, to be a Classic, the model must have the keyring, toothpick and tweezers.
There are a few exceptions to this rule: When the scales are metal the knives generally do not have the tweezers or the toothpick - Such as the Alox Classic SD, the Brushed Stainless Steel Classic, and knives in the Classic SD Sterling Series.
To make the definition just a little more imprecise! - The 58mm model with machined stainless steel scales is known as the Broker. There is also a special issue Classic SD series made for Tiffany Co. that has Sterling Silver scales that includes the toothpick and the tweezers!

Over the years the Classic has been produced with a very wide variety of scale colors and material. There are more scale varieties than one can really imagine, with new ones constantly being introduced, by Victorinox, and by licensed partners.

The Classic is currently (2019) available in both the standard scale materials: Cellidor (plastic) and Alox, as well as a few Sterling Silver varieties. In the past, they were made with a wide variety scale materials, including nylon, stainless-steel, mother of pearl, gold plated steel, various woods, and natural horn.

The Classic is available in a wide variety of colors beyond the basic red.
See Color Palette for an example of some of the colors available, or once available.

This section lists some of the key variations of the Classic. When scale colours and materials, custom and advertising knives are considered the variations run into many thousands!

The Classic was first introduced in 1935 without the toothpick or tweezers, which were added in 1942 to all models.


Note: Also see the comment at the bottom of the Variations section.

The Classic is the standard 58mm knife, however there are many similar models, even with the same toolset, that are often mistakenly referred to as Classics - See below: