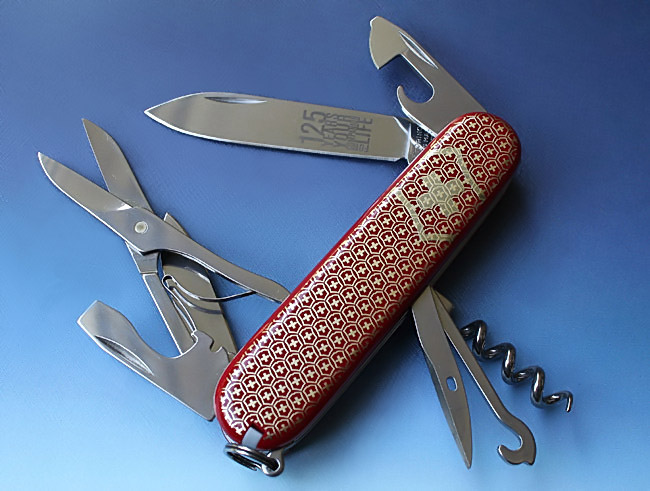 The Victorinox Climber is a very popular 91mm Swiss Army Knife with a tool configuration that has a long history. This three-layer model adds the renowned Victorinox scissors to the basic Spartan model.
As a popular and slim model, it is available with many different scale colour options, and is also a common model for the tourist/picture knives.

An earlier configuration with the same tools but no-keyring was known as the Traveller.

The Climber is available with Cellidor scales in red, black, ruby, sapphire, shadow grass camouflage, breakup camouflage and many other colours. Ecoline/Economy Nylon scales are also available.
It is the only 91mm knife with Nylon StayGlow scales available to the North American market (although many other models have StayGlow scales exchanged as a modification!).
In 2009 Victorinox started to produce a version of the StayGlow scales with the addition of the BSA (Boy Scouts of America) logo.

A Swiss Army Knife with this tool configuration, or very similar, was available for a long time before descriptive names were used. Early vintage versions have a clip-point small blade.
This model has been known as the Backpacker in some regions, and was marketed in the US as the President.

The earlier Traveller model (1.3702/54591) was likely introduced in the late 1970s and was the progenitor of the modern Climber (early 1980s?). However, unlike the current Climber, it did not have the keyring attachment, and at that time no models had the multipurpose hook. It was unavailable in North America after the mid 1980s. The no-keyring variations are sometimes available in other markets, and can appear from time-to-time, if a large order is requested by a re-seller or distributor.

Prior to 1991, the Climber did not come with a multipurpose hook. Many other historical tool changes also apply to the Climber, such as the switch from scissors with a screw to scissors with a rivet, and from a grooved corkscrew to a smooth corkscrew.

The older Traveller should not be confused with the modern (2006) digital Traveller which is quite a different model.