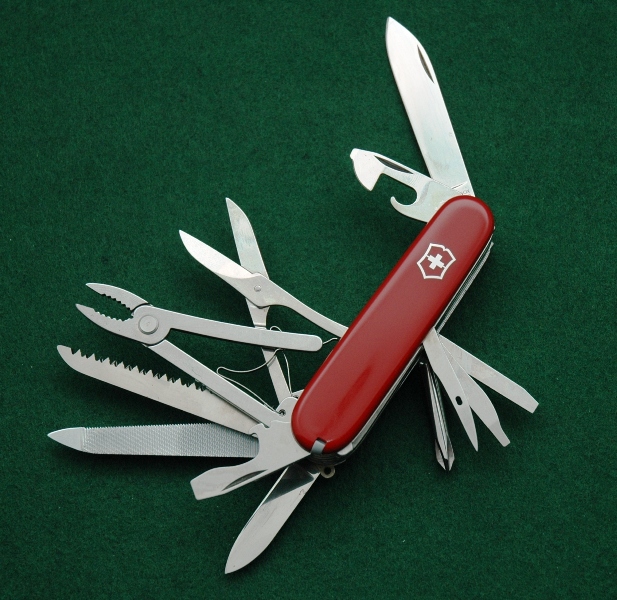 The Victorinox Craftsman is a 91mm model, with a large tool set in six layers, first introduced around 1973. It had a historical connection to the American Space Program.

This model was current during the period when Victorinox were making many changes to their tool line up, so many slightly different configurations have been produced. The major change being the pliers replacing the fish-scaler in 1986/7.
See pictures right and Tools and History sections below.

Name Disambiguation:
The four-layer 84mm Artisan was known as the Craftsman, for a couple of decades in certain English speaking markets, before the name was taken on by this model.

As above but - The pliers are replaced by the

As above but - No chisel or hook

First introduced in 1973 (Model 1.4793) as a successor to/replacement for the old six-layer Champion b which had been retired following the introduction of the seven-layer Champion in 1973. The Craftsman was a prominent model in the Victorinox line for quite some time.
The original version is old enough to be found with a Victoria tang stamp on the back of the blade, and features tools from that time such as the small clip-point blade, and the original version of the fine screwdriver.

In 1986/7 it was revised with the newly invented pliers replacing the fishscaler/ruler, and also gaining a wood chisel.
Models manufactured after 1991 contain the hook and the scissors have the modern rivet attachment which replaced the screw.

Being chosen to commemorate the Apollo 11 landing has continued to bring it a lot of attention over the years.
However it has probably been discontinued since at least 2006 - as it does not appear in the catalogue for that year.