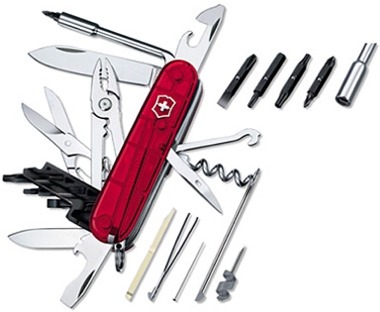 The unique feature of the Cybertools is the bit-driver which comes with four interchangeable bits, each with two heads. Many of the bits are designed for screw types and sizes commonly found in electronic and computer equipment, making these models especially useful for people who regularly work with this type of equipment.
When closed, one bit is stored in the driver itself while the other three are housed in a special 'rack' that fits below the driver. The rack has a small protrusion on the end that prevents the bit in the driver from falling out.
All models have 'Plus' Scales, that include a removable pen.

For the Cybertool M (34)
All Cybertool models contain this basic toolset (layers and scales), apart from the CT S where indicated *

There are four models of the CyberTool.
Note: The numeric after 'Cybertool' in the original model names was meant to indicate the number of functions of that particular model.
However this claim can be somewhat contentious (eg Is the keyring really a function?!), so it is not surprising that Victorinox moved to the S,M,L designation.

Originally known as the Cybertool 29, the three-layered Cybertool S is the slimmest and lightest model.
It removes the scissors, pliers, and multi-purpose hook from the CT M.

This is the most common (considered the base) model, originally known as the Cybertool 34, it has five layers. The tool-set is described above.

Originally known as the Cybertool 41, the seven-layered Cybertool L contains all the tools of the Cybertool M, adding the following additional tools:

In 2009 Victorinox released a limited edition Cybertool 34 as part of its Jubilee Series that marked its 125th Anniversary (see Variations).

"In 2011 it appeared that the CyberTool 41 was discontinued, at least in North America, possibly due to a new model being under development. Continued 2011 availability in Europe was thought to be from existing stock, or based on sales with the current market pricing." Later Wiki Update: This withdrawal never transpired, and was probably speculation!


US Model Numbers: - Also In brackets above (#5xxxx)

The unique bit-driver tool means that there are not many models that are similar to the CyberTools. However the bit-driver is available on a few of the larger Swiss Army Knives.