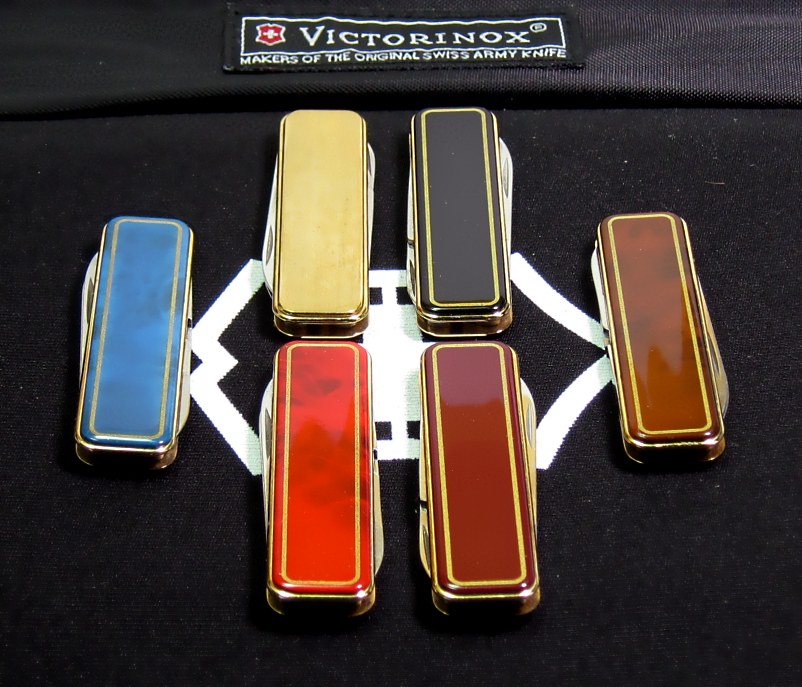 The Victorinox DeLuxe is a luxury model containing the same layer tools as the Classic, but featuring high luster enameled scales with a marbled pattern and gold trim. These knives do not include the toothpick, tweezers, or keyring.
The series of knives included five enamel finish models in different colors, and one gold plated (four micron) edition. However, there appears to be at least two color variations, or the series was extended at some point, to include darker red and darker blue editions (see Extended Series image below).
The knives in this series were packaged in lined jewelry gift cases.

Metal scales made of brass with marbled enamel paint in red, blue, black, burgundy and brown. There is also a gold plated sterling silver version too. The scales were squared off at the shoulders so they present a more rectangular profile.

Some knives have a gold Victorinox shield printed on the top scale, this variation appears much less common and belongs to a later edition manufactured in 1987 (date from Dan Jacquart).

According to Victorinox these were produced between 1980 and 1999. In 1987 a Victorinox shield printed in gold was added to the top scale of he knife. The gold plated sterling silver model was shown in a 1991 catalog by itself and notes were added that it will be discontinued when all the inventory is sold off. The last known mention of this series was in the 1999 catalog. These knives were originally sold in a luxury box.

At least one model is suspected to have been mis-numbered either by Victorinox or the dealer with the number 0.6210.80 stickered on the blade. They may have been intending to represent the series, but the specific knife appeared to be model 0.6210.85 and labeled maroon.

While technically 56mm the DeLuxe is listed in the 58mm section which is the closest standard size.