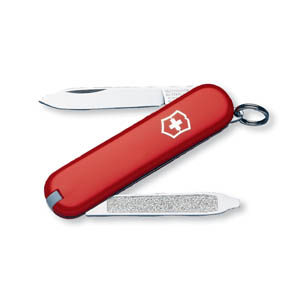 The Escort is a less common 58mm Victorinox Swiss Army Knife. It is a single layer knife and only weighs six-tenths of one ounce, the same weight as the Companion.
Production may have stopped and started over the years.
This same tool configuration was known earlier as the Vintage.

The Escort scales are Cellidor. Normally available in red - black has also been seen.

The Escort II replaces the pen blade with an emergency blade. This version is less common, and sometimes packaging will describe it as the Escort SD/Emergency Blade.

The Escort was first introduced in 2000. SABI first had it available in the US in 2003.

Design Change: Escorts and Escort IIs started appearing in 2008 (maybe sooner) with the position of the two tools reversed - so the knife blade opens away from the keyring. This makes it more convenient to use the blade whilst it is attached to a keyring or lanyard. Models like the Scribe that are based on the Escort also have the blade opening away from the keyring. It is not known when exactly this change started appearing, but it was readily available on Escorts in 2008 and is depicted this way in some 2008 catalogs. Product packaging may depict the knife with the original design.