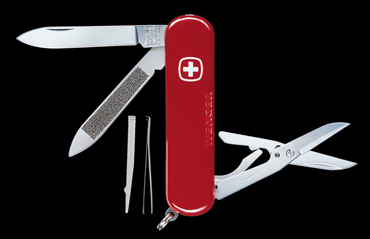 The Wenger Esquire is the baseline or 'standard' small sized (65mm) model of the Wenger range.
It comes in a large number of colors and various scale materials.

The Evolution 81 (EVO 81) is a later design that features ergonomic scales. The EvoGrip 81, released in the spring of 2009, adds non-slip pads to the handles.

Discontinued - But available as a Victorinox Delémont.

Red plastic scales are standard, however this model has been manufactured with a large variety of different materials and color variations for the scales.
The different materials include stainless steel, Alox, sterling silver, and others.  The metal versions do not include the toothpick or tweezers.