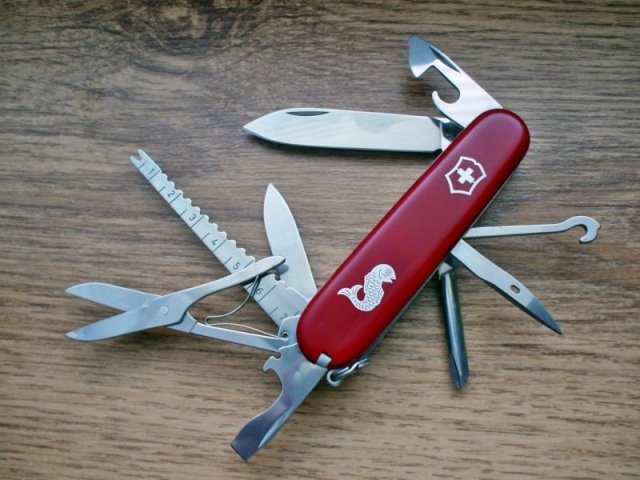 The Victorinox Fisherman is a 91mm Swiss Army Knife with Cellidor handles featuring an emblem of a fish at the bottom of the top scale, originally this was a metal inlay, but was switched to be printed more recently (date???). This knife has quite a long history, and its tool selection has changed over the years.

The Fisherman Plus (possibly not an official name) adds a wood saw to the Fisherman and was a less common model. There were other tool variations on this model in the early days.

The Fisherman Plus is no longer available.

The Fisherman Plus adds the:

Red or blue (for older models) Cellidor scales with a special metal inlay on the top scale of a fish, which was later switched to be printed.

This model has a long, and slightly confusing, history, involving some significant tool changes and which is also intertwined with the Angler model.
The fishscaler and back-spring Phillips were both introduced in 1952. A catalogue from around that time (possibly a little later) shows a 'Sportfischer' (Fisherman) model which was available with a corkscrew (Model 235fa) or a Phillips screwdriver (Model 135fau) and optionally a wood saw (Model 236fau). It also shows the blue-scaled 'Fischermesser'  (Fisherman's knife) which has the corkscrew and adds the metal file, and optionally a wood saw.

The modern distinction of the Fisherman having the back-spring Phillips drive and the Angler having the corkscrew probably came in in the mid-1970s.
Note: Early versions of the Angler also had the scissors, as opposed to the later/current versions which have the pliers.

Historically several variations were available, adding additional tools to the Fisherman such as the metal file or the wood saw.
A much older version of the Fisherman with blue scales was also available. This model is highly sought after by collectors !

Ed Note: There seems to be some inconsistency in the numbering here, as the older blue scaled model, has the same number as the current red scaled model - Usually blue vs red scales would drive a different suffix to the model code!