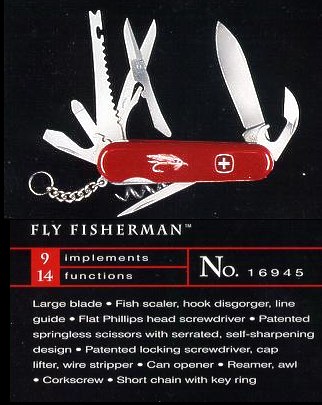 The Wenger Fly Fisherman is an 85mm four-layer model designed for the fisherman.
It is one of several fishing oriented models, this one having an imprinted fishing fly lure image on the scales.
It is also one of the few to feature the flat Phillips screwdriver opposite the main-blade, rather than the typical small-blade or nail-file.

The tool list in the image top right does not indicate any scale tools. However versions are known to exist, unusually, with tweezers only, and no toothpick. - See image above.

The Fly Fisherman model appears in the Wenger 1991 catalog.