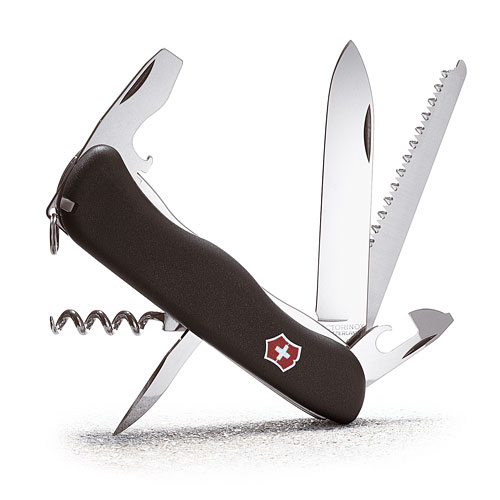 The Forester model is an 111mm Victorinox model with a liner-locking large blade and cap-lifter tool and a wood saw.

There is also a Forester OH featuring a one-handed opening main blade, also known as the One-Handed Forester.

As of 2016 the Forester replaced the similar Rucksack model, which was withdrawn.

Neither present in the dual density or wooden scaled versions

From 2017 Victorinox only produced liner-locking 111mm models, and the side-locking Rucksack, which had an equivalent toolset to the Forester was retired. So the Forester effectively replaced the Rucksack (although both models had been available prior to 2017).
At this time they also released the non-OHO Forrester with red nylon handles - previously only black had been available. They withdrew the serrated OH blade model (0.8361.MWC), and released the plain OH blade model (0.8361.MC). A wooden handled Forester was also released.

Numbers in brackets are US model numbers