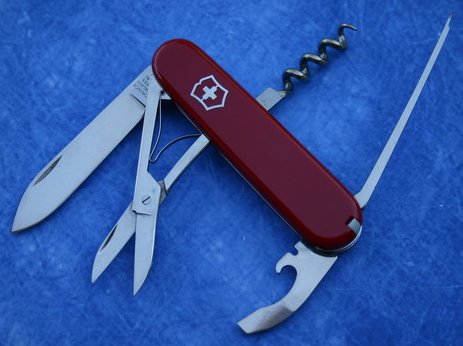 The Victorinox 84mm Golfer is a slim two-layer model featuring the scissors. It was made in two versions: The regular configuration, or with the addition of the long thin nailfile/cleaner on the back.

As scissors are no longer available on any 84mm sized Victorinox knives, this model remains highly sought after, particularly the version with the long nail-file, which was offered from 1977 to 1999 .

Starting with this model, there were several changes over the years leading to the 91mm Golfer, eventually ending up with the Compact, so this model is regarded as the ancestor of the Compact.

The name Golfer was also given to another 84mm model more commonly known as the Artisan or Craftsman, as can be seen in this US catalog. This is another example of how the same name has been given to different models in different markets and over the years! Also how the same model is sometimes known by different names.
Note: Most names have been standardised across the globe since the mid '70s.

The original version of this model (0.3102) had a small blade instead of the combo-opener tool.
The original version of the Combo Tool did not have a half-stop and had a more angular profile, with a straight edge directly above the nail nick, as opposed to the more common rounded edge on the later version.
The model numbers in the 0.16xx range and those in the 0.34xx seem to represent identical model configurations, and it is likely that this resulted from one of the changes in the numbering system that Victorinox has made over the years.
This model was probably very popular in its day, as it was made available in luxury models with genuine horn and mother-of-pearl scales.