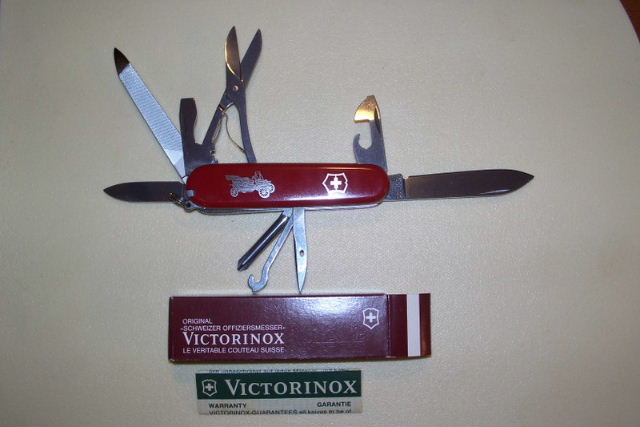 The Victorinox Grand Prix is a four layer model with scissors and a metal file, which is quite popular due to the beautiful inlayed vintage motor car. The photo shows a later version with the multi-purpose hook and keyring, which did not feature on the more common earlier models.
This knife is a predecessor of the modern Mountaineer.

Standard red Cellidor scales with a metal inlay of an antique automobile.

According to Victorinox this model was manufactured between 1980 and 1995. Many different tool configurations of the Grand Prix are around, as it was current when the Victorinox tools were evolving and changing. Older models have the original version of the fine-screwdriver on the back of the metal saw/file layer, and do not include the hook on the back of the scissors layer. Versions are available with the square and round shank Phillips, both usually with the can-key. The awl gained its eye, and the hook arrived during the lifetime of the Grand Prix, and possibly other tool changes. The version with the fine screwdriver on the reverse has been reported as US Model 54040.

Note: Two boxed Grand Prix models mint from Victorinox labeled model 54040, did not have the fine-screwdriver, or the hook, they did have the round Phillips with can-key. These were NOS and could have been mislabeled as it appears they were not in their correct original boxes, or this item number may not be a precise indication of the tool configuration that has changed over time. Interesting also is that they did not include a keyring.