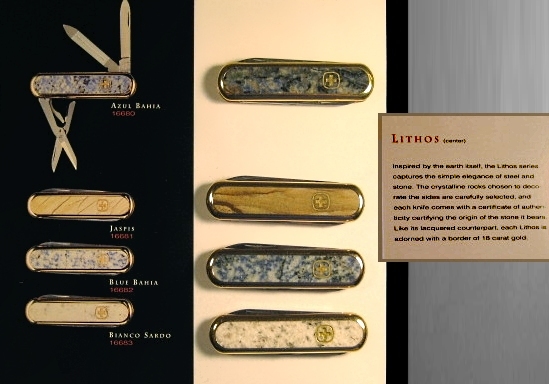 The Wenger Lithos Series are upmarket, luxury handled versions of the Esquire model containing the same layer tools, but excluding the toothpick, tweezers and keyring.
They featured 18 karat gold plating and high quality, highly polished, inlaid stone scales. They also featured a unique true ceramic nail file, with the ceramic substrate bonded to the metal tool.
The packaging included a bright gold-foil outer slip cover that enclosed a wooden presentation box.
They were marketed under the 'Wenger Max' branding.

The Lithos Series was introduced in January 1992. Models were supplied in a solid wood presentation box, along with a black leather slipcase with folding closure and featuring the gold Wenger Max logo. The Wenger Max logo may be market specific, and simply the equivalent of the Elite Series in North America.

US Model numbers in brackets