Victorinox introduced the pliers on the new SwissChamp model in 1985, making it a relatively recent tool. Since then it has gone through three versions.

The pliers on the 91mm models are opened by picking up the end of the tool, which protrudes slightly beyond the end of the knife - An equivalent technique to the deployment of the saw.

The same pliers are installed in the 111mm models*, however they have a nail nick on the side to enable deployment, since the knife body is longer than the pliers, so does not allow access to the end of the tool. The pliers in 111mm models are always paired with a short, end mounted, inline Phillips screwdriver.
* Note: This is somewhat unusual as normally tools are re-designed for different frame sizes.

Versions of the pliers tool: 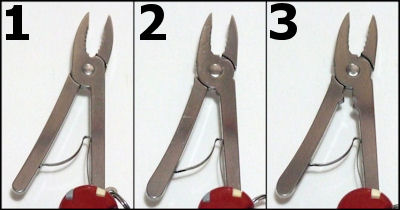 Models with the Pliers


Fold-out pliers were introduced in Wenger's 130mm 'NewRanger ' series in the Alinghi 176 and 177 models in early 2007.
Other NewRanger models with fold-out pliers followed in the fall of 2007.

The jaws and handles of the pliers are a clever three-piece assembly that folds completely away in the knife handle when not in use.
Despite this complex function they are quite strong and rugged.
The pliers themselves are spring loaded, powered by two individual narrow back-springs.
A third back-spring is used for the folding handle mechanism.
The jaws have fine serrations near the tips and a coarse gripping area in the center, and an anvil style wire cutter at the back.