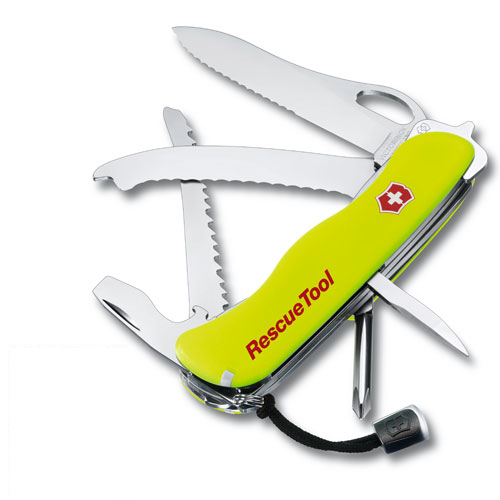 The Victorinox Rescue Tool is designed for use by emergency response personnel and contains tools to assist in rescue activities, such as extracting individuals trapped in vehicles, and in other general and medical emergency situations.

This model was designed and developed as part of a five year project, in cooperation with medical and rescue service professionals in Switzerland. The knife was very well received and won the IWA International Knife Award - Knife of the Year - in 2007.

The Rescue Tool broke new ground for Victorinox by including user-replaceable metal tools. For most other models only the tweezers and toothpick are removable/replaceable. However, the special glass saw and window breaker tools in the Rescue Tool can be replaced when they become worn out, without the need for any special tools.

This model is normally sold with a Nylon red and yellow case.

The original Rescue Tool came with Nylon luminescent (glow in the dark) scales. In 2008 it also became available with black Nylon scales.

The Fireman and OH Parachutist are close ancestors of the Rescue Tool.

The 'new' liner lock system in this model was developed to address the more demanding requirement of the public service agencies in rescue situations and is tested to be stronger and even more reliable than the slide-lock mechanism (see details in link). The liner-lock blade is also one-handed-opening (OHO), the hole on the blade was originally elliptical, on later models it is more circular.

The Rescue Tool was awarded the IWA International Knife Award Knife of the Year in 2007.

In 2008 a number of fake Rescue Tools started appearing on eBay. To the untrained eye the outward appearance of these knives was extremely convincing. The build quality however was poor, and they could pose a safety hazard. Refer to the External Links section below for more information.