The Phillips screwdriver was invented by Henry Phillips in the 1930's with the intention of providing a safer alternative to the traditional straight-edged screwdriver. Henry Phillips wanted a screwdriver that would prevent a damaging process called over torquing. This feature is also its weakness.

This tool was introduced into Swiss Army Kinves in the early 1950s, and there have been at least five versions produced, (although the number may be closer to eight!).
The original versions have a squared off shank rather than the round (cylindrical) one used today, and might be slightly larger than the current #2 Phillips. Early vintage versions have a file cleverly incorporated into the inner flat side,
In the mid-1970s the Phillips had a slot cut into it to create a can-key, which is used as a key to open food tins designed to be opened by removing a metal strip from around the can. These tins were quite popular in the 50s through the 70s.
The current round tool was introduced round about 1980 and is slimmed down from past versions and shaped to fit a wider range of screw heads. The can-key was withdrawn in the early 1990s so can help in dating models. 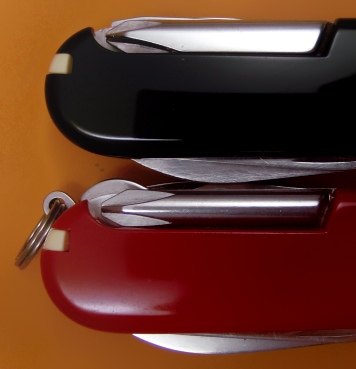 Round and square Phillips folded away