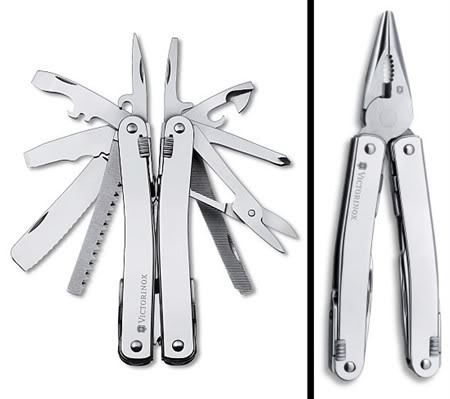 The Victorinox Spirit, correctly named the SwissTool Spirit, is a plier-type multitool with uniquely curved handles, and a wide assortment of tools that all lock in the open position.


All of the blades and tools fold from the outside of the handles, allowing quick and easy tool deployment without opening the pliers. This arrangement also helps make for a more comfortable feel in the hand when using the pliers.

The Spirit is somewhat smaller than the earlier released SwissTool models. The most significant differences are the greatly reduced weight, and the curved ergonomic handles.

Two other very distinctive, and unusual, features of the Swisstool Spirit are:
- The blunt tipped, serrated sheepsfoot blade sometimes referred to as the as the 'butter knife' . This was a departure for Victorinox from the normal drop-point blades seen in nearly all their other tools.
- The Spirit scissors which also have a completely different design from the regular Victorinox scissors.

In 2020, Victorinox introduced a one had opening version of the Spirit, called SwissTool Spirit MXBS.

The Spirit has ten blades/tools - five in each handle - many with more than one function. All of the blades lock open securely, and all are tensioned by means of the same style individual backsprings as first seen on the SwissTool.

These tools are common to all Spirit models:

Two additional tools (one in each handle) are added by the various models described below.

The basis for the Spirit is a set of needle nose pliers. The plier jaws have fine serrations out near the tips, coarse serrations in the center, and both hard-wire and soft-wire cutting notches near the pivot. Some models are available with a cap crimper  in the pliers.

The models listed below add the tools indicated to the common tools listed above.
The names Swisstool Spirit I, II and III also appear to have been used at sometime. There also seem to have been some model name changes.
These model names come from the Victorinox catalogue 2015.
The Spirit is usually packaged with a Nylon or leather case/belt pouch ('.N' or '.L'  suffix to the model number respectively).

This model was probably initially known as the 'Swisstool Spirit' - or the 'original ' or 'standard ' model - See top photo.
However the Victorinox catalogue (2015) calls the model below (the 'Spirit S') the Swisstool Spirit and this one the 'XC ' !!

This model appears to be withdrawn (2017)

This model was introduced in 2020 and was the first Spirit variation with one-hand opening blades and without the wood saw. Available in both stainless steel and black oxidized finish. Apparently, some of the tools have changed positions: the metal saw and scissors for example are no longer located on the same side of the tool. This model may have been a custom order. Possibly only available in Switzerland. More information is needed.

Plus Package Models and Tools

The Spirit is available with two 'Plus Packages' , which include the following stand-alone tools: a corkscrew; a jeweler's (micro) screwdriver; a set of six 1/4" hex bits in a plastic holder; and either, an L-shaped wrench, or, a small ratchet.
The corkscrew attaches to the Spirit by means of a small contoured hole in the plier bracket.

The two current (2017) Plus Packages upgrade the XC model.

The handles are curved, highly polished stainless steel, with special coating on some versions.
The Victorinox logo and the full word are stamped on both sides.

The Spirit was originally introduced in 2004. The Spirit S came out two years later in 2006. The Spirit X became readily available in North America in 2009. The models available have changed slightly over the years, and there has been some re-naming of the models - See Models section above.