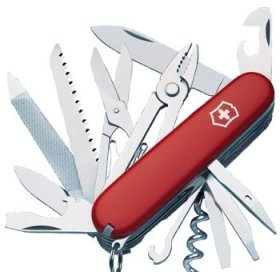 The Victorinox Handyman is a currently available (2019) six-layer 91mm Swiss Army knife with Cellidor scales, it has a large number of tools, including five on the back.


This model, like some others, has been available over a long time period and some earlier versions have various tool differences to the current version. The most significant being the pliers completely replacing the fish scaler in 1986 - See Tools and History below.

Name Disambiguation:
Not to be confused with the older, five-layer Handyman 7236mau - (Handwerker in German).

As above but - The pliers are replaced by the

As above but - No chisel or hook

The Handyman was introduced in 1973, around the time the model number format changed, and model names were standardised by Victorinox.
Its original toolset (fish scaler not pliers, no chisel or hook, original fine screwdriver) was equivalent to the old six-layer Champion a (with the exception of the long nail-file), which had been semi-retired following the introduction of the seven-layer Champion in 1973.
The pliers were introduced in 1986, replacing the fish scaler.
Its evolution followed a very similar path to the Craftsman, with tools and tool versions changing as the Victorinox tools evolved. The Craftsman page outlines some of those differences.

The I.N.O.X. Sky High watch came in a gift box with a Handyman with white scales, astronaut inlay and white paracord keychain. Limited to 2,000 pieces worldwide.