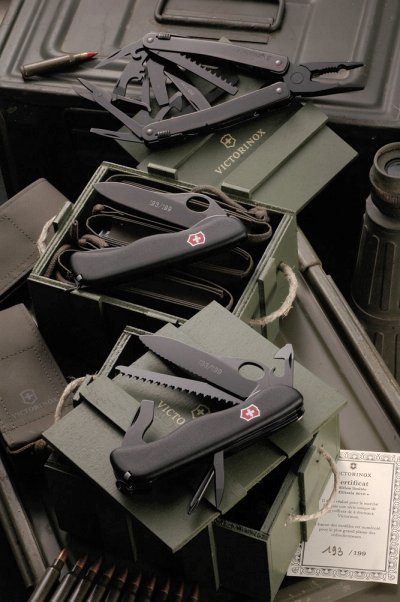 The 2010 Military Collection is a very limited edition of only 200 sets. This special military theme collector's set was a collaboration between Victorinox and their representative for France and Italy. There was no official distribution outside of these markets, but international on-line purchases expanded distributuon. This set features 3 different tools, the Sentinel with clip, ))One-Handed(( Trekker (Trailmaster in Europe), and the Spirit-X with blast-cap crimper. The set is packaged in a unique wooden case designed to look like a military crate, and each of the tools come in their own Victorinox military sewn leather pouch. In keeping with the major theme, all the tools are made stealth black using a black oxide coating seen on a few Victorinox tools in the past. The tools in this set even have black liners and the Sentinel includes a black clip. The attention to detail in this set is high.


Tools in this set: