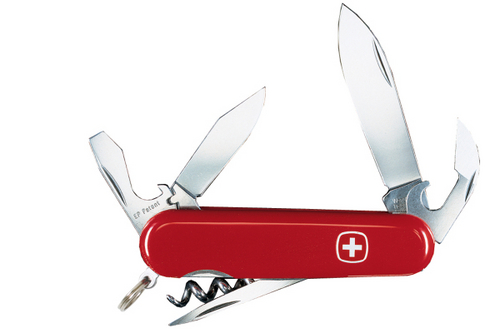 The Wenger Viking is a two-layer model featuring the standard toolset, but with a small blade as opposed to the more common Wenger nail-file. It is often used as an advertising imprint model for company marketing.


The Wenger Adirondack and the Serrated Adirondack adds a locking blade, with the same tools as the Viking.
The Hunter variation featured a rifle image on the scales.
A later version which featured toothpick and tweezers was listed as Classic 101.

The Wenger EVO S101 has the same toolset as the Viking, but features the newer style Evolution scales and a locking blade.
This model was also listed as Security/Sécurité 10.

See the Variations section for details.

Discontinued models but the S101 is available as Victorinox Delémont.

No scale tools normally.
The toothpick and tweezers are present in the later Adirondack version, and unnamed variation.
The earlier Adirondack featured only the tweezers.

All models have standard red scales