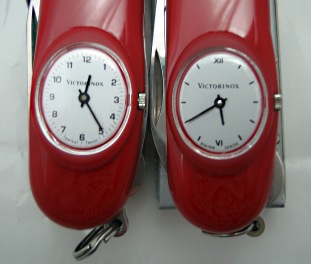 The Watch or analogue clock is an electronic timepiece, unusually built into the scales of a Victorinox Swiss Army Knife.
It was introduced in early 1992 with the TimeKeeper model, there was aslo also a SwissChamp version - the SwissChamp Supertimer. It was officially discontinued in 2007, being replaced by the digital functions of the Timekeeper Alarm and related models.

The clock has an oval silver dial measuring 17 x 19.5mm. The original version of the dial had Roman numeral markings at the twelve and six o'clock positions and line markers denoting the other hour positions. The later version had numeric digits denoting each hour and fine line markers for each minute. The crown is a minute 3mm and is pulled out and rotated to set the current time. It has a Swiss-made, zero jewel, quartz movement.

The unit is water resistant and is powered by a user replaceable 1.55V button cell battery (377).
To change the battery, the watch unit is first removed from the scales - See instructions here.
History