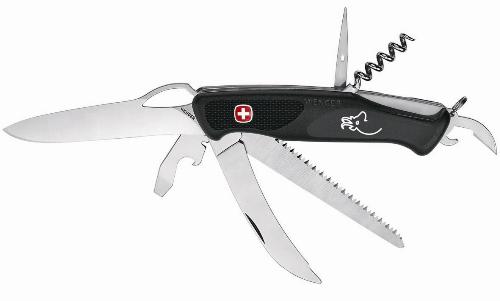 The Wenger Ranger 57, also known as the Hunter, is a 130mm model with four tool layers from the 'New Ranger series'. A larger knife suitable for heavy work or outdoor activities, it features a large one-handed opening main blade, that locks in the open position. Designed for hunting tasks this model also features a large curved blade with a blunted tip, known either as a Safety Blade or a Gutting Blade  which is used for dressing wild game.

The Ranger 67 models have the same tool set, but the knife has a regular nail-nick opening blade, the Ranger 67 Clip adding a pocket clip.

The Ranger 58 is also known as the Hunter, but includes a Phillips screwdriver instead of the corkscrew.
A later knife, the Ranger 50 also featured the gutting blade with camo scales. Discontinued - But available as Victorinox Delémont RangerGrip 57 Hunter.

Black Nylon scales, contoured in the 'Evolution' style to fit the hand. Deep checkering is molded into the thumb area on both sides, for increased grip. One side carries the Wenger cross logo, along with 'WENGER'  moulded into the scales. The cross logo is a push button, which, when depressed, releases the liner lock on the knife blade. Stylized outline of a deer on the scales.
The later RangerGrip models have black rubber inserts in the handle and Evo contours to allow a soft and reliable grip in all weather conditions.
A version of this model with AP Blaze orange camo scales was announced in 2011. There is also a Hardwoods version with green forest camo scales.

Introduced in 2007 as an initial member of the 130mm New Ranger Series.
There was a period of confusion in the Spring/Summer of 2007, when the Model 58 was packaged and sold in North America as the Model 57. This was corrected by Wenger in the fall of 2007.
The Ranger Clip 67  was introduced in the Fall of 2010.

US Model Numbers in brackets above