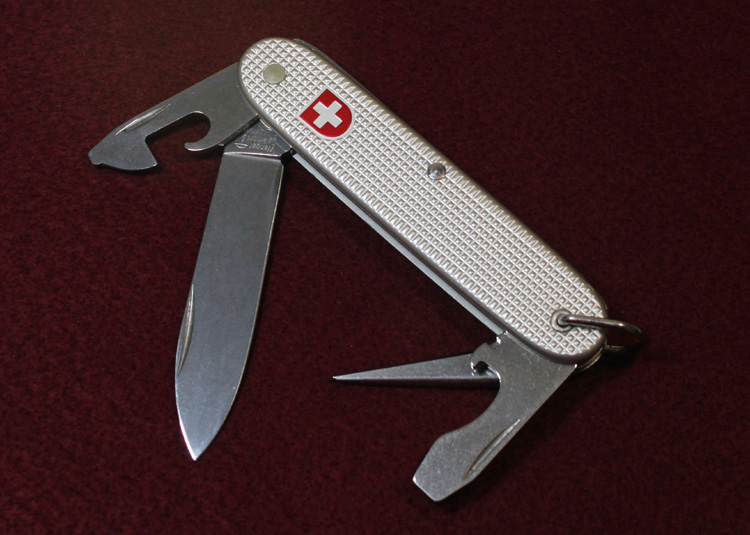 The Wenger Soldat, is a true Swiss Soldier Knife manufactured under contract to Swiss Army specifications, and issued to enlisted personnel between 1962 and 2008. Outside of Switzerland it is better known as the Standard Issue, or SI, for short. This version of the Soldat (French for soldier) is based on the Swiss Army 1961 design specifications that were developed by Victorinox.

Some people classify the Standard Issue as the civilian version of the Soldat, as it contains a bail mounted in the hollow end-rivet, which was never included on issued Soldier Knives.

This is the only 93mm Alox scaled model that was manufactured by Wenger. After 2008, Wenger continued to manufacture this model for civilian retail markets. Since it is was no longer an official Soldier Knife  after 2008, Wenger started to refer to the model as the Swiss Army 70.

The year of issue/manufacture is stamped on the reverse of the main blade tang.

None - The military knives did not include the popular toothpick and tweezers of the civilian knives, presumably because they are not considered necessary for a soldier, and could be too easily lost in the field. This would also make the manufacturing of the Alox scales easier.

Wenger has been producing Soldat models since approximately 1908.

The Wenger 1961 Soldat is an interesting model in the Wenger product line! Since it is based on specifications that were developed by Victorinox and the Swiss Army, it has several unusual components that do not feature on any other Wenger models:

Even though this model is based on a Victorinox design, Wenger managed to make it their own by keeping the hollow rivet, which usually came with a bail. - Although solid rivet versions were also made - as can be seen in the image. Other subtle differences in manufacturing over the years also are visible in the knives. See Manufacturer Differences above and the article in External Resources below.

Since the tools were issued to soldiers, in part to maintain their firearms, they were under the supervision of the Waffenkontrolle (weapons control), and early models contain their approved stamp on the scales. See Wiki Victorinox Soldier 1890, Soldier 1961 pages, and external articles WaffenKontrol, Soldier 1961 for additional information.

As it was a successful item in the Wenger product line, they continued to produce it after 2008 for general purchase.
Since it was no longer a military issue knife, it did not have the year stamped on the tang (right image), and Wenger called it the Swiss Army 70.

The Wenger SI and the Victorinox Soldier 1961 are both manufactured to the same Swiss Military specifications. However they differ somewhat: The Standard Issue’s blade shape is slightly different, and the reamer is ground to more of a point. Also Victorinox never attached a bail to the hollow rivet, and stopped using it after 1994.
For a detailed comparison see the Swiss Army Knights article below.

The Soldat (and Victorinox Soldier) is listed,in error, as a 91mm model in some official documentation!