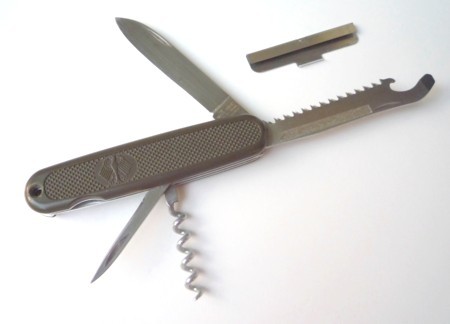 The German Army Knife, or GAK, is a 108mm knife manufactured by Victorinox and was official issue to the German Army (Bundeswehr).
This knife marked a touch point in Victorinox's history: With the Swiss company manufacturing knives for the German Army; and also initiating the 108mm platform.
The 108mms have unique tool designs among Victorinox frame sizes, and all the main layer tools open in the same direction, pivoting at the same end of the knife (top). This makes them very intuitive, and quick to get accustomed to.
The 108mm GAK was eventually replaced with the 111mm One-Handed GAK.

The saw has a reputation as one of the best wood saws, although tests conducted by MTo members have questioned this!

The GAK and other 108mm knives do not have any non-blade tools such as the typical toothpick and tweezers. This is typical of the military knives, but rare for the civilian knives.

The GAK-2, (unofficial name), has a modified saw/opener tool that has a textured area on the blade for use as a match-strike or nail file.

The 108mm GAK was most likely a German Military design/specification, to which Victorinox may not have had a lot of input, just receiving a manufacturing contract, along with other military suppliers. See SOSAK article: German Army Knife Variants.

The 108mm platform is quite different to other Victorinox designs, and at first, it does not look like it really belongs. It was the first Victorinox knife to use Nylon scales rather than fiber or Cellidor, and introduced the unique wood saw/opener/screwdriver combo-tool, to which the file was added in 1985.

The design turned out to be a very good one of simplicity, excellent functionality and durability. With the manufacturing machinery in place, Victorinox expanded the range beyond the GAK, spawning a civilian version - the Trooper, and the rest of the Safari Series. The 108mm knives are admired by many, with all models now being collectible.