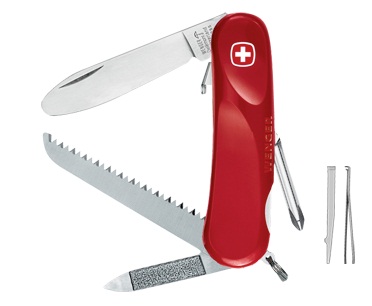 The Wenger Junior 09 is a two-layered model and one of a series of 85mm models that feature a rounded main blade.

Discontinued - But available as a Victorinox Delémont - See Related

The original version with Classic scales did not have the tweezers and toothpick. The later Evolution version has both

The Junior series was designed by Wenger 'to be friendly and safe for young campers, backpackers and scouts.'
All models in the series have a blunt, rounded main blade. Most, but not all, models also have a 'padlock' safety locking mechanism on the main blade.

It is not known when the first Junior series model was introduced. The 2005 SAK selector lists three of them, with the comment that none are currently available!