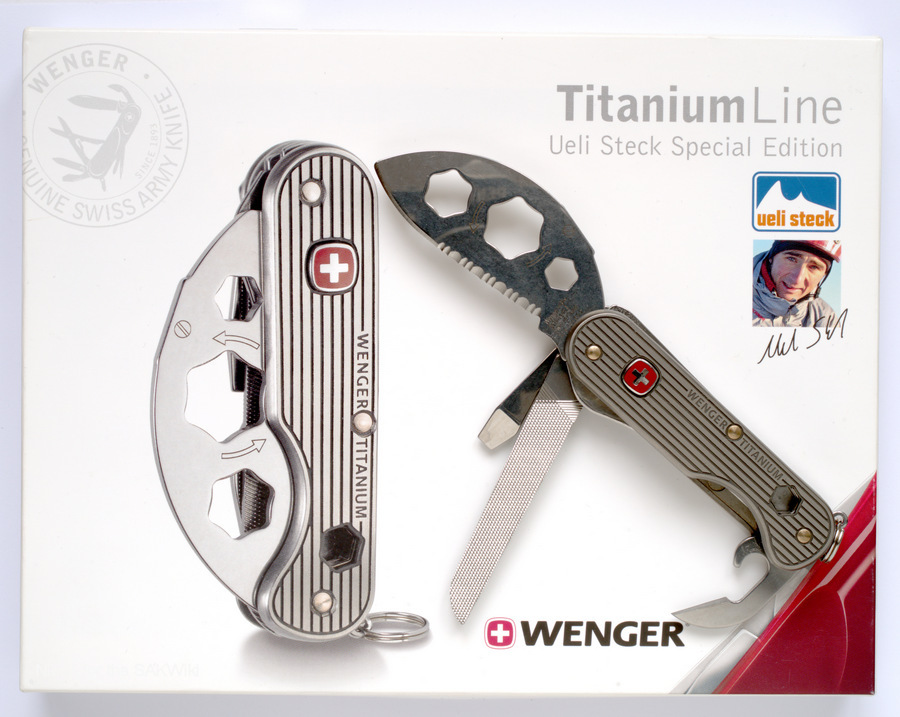 In January 2011 the Wenger company announced the Titanium Line, consisting of three 85mm models, but in a unique brand new design. The handles were made from a titanium metal alloy which offers increased strength, without a significant increase in weight. These models were the first regular production Swiss Army Knives to use titanium, and the Ueli Steck Edition was the first Wenger 85mm model to contain a stainless-steel cut file/metal saw.


All members of the series feature the very unusual combination tool which incorporates a knife-blade, three wrenches and a screwdriver. The blade is equipped with a liner-lock, which is released by pressing on the release button (red Wenger logo), or by pressing the protruding tab on the actual liner. There is also a ¼" (14mm) bit-driver / wrench slot (port) in the front side scale for standard bits, two of which are supplied with each model. The wrenches and screwdrivers are for adjusting mountaineering equipment (eg an ice-axe).
All knives were packaged with a lightweight (24.5g) all-weather, Velcro closing belt-pouch, that held the knife, and up to three screwdriver bits.

The Titanium Line was created by a partnership, between the well-known Swiss mountaineer Ueli Steck and Wenger, to design a lighweight, functional pocket tool to carry on mountaineering expeditions, that suited his style of climbing.
These models also continued Wenger's corporate strategy of providing tools for the outdoor enthusiast.

An instruction and information leaflet for the Titanium Line can be downloaded here.

The basic Titanium 1 model included the combination tool, ¼" bit-driver and a keyring. Two bits were supplied with the knife: a 50mm flat head (0.6mm x 4.5mm); and a 50mm Philips #3. The other models add the tools indicated below to the Titanium 1 toolset.