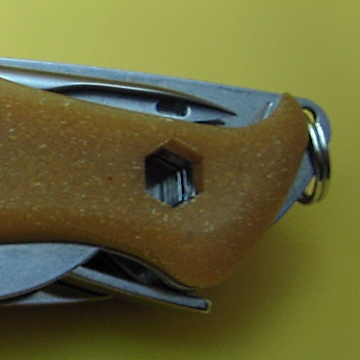 The robust ¼" Bit Driver was introduced in 2009 to some of the Wenger 130mm models, such as the Ranger 174 and the Alinghi 181. The bit driver is a hole incorporated into the scales and frame of the knife that accepts standard ¼" (14mm) quick release bits, the bits snap in securely, and are easy to pull out.
This feature enables great capability and versatility in the tool to perform many tasks.

An equivalent feature was introduced into the titanium scales of the 85mm Wenger Titanium Series in 2011.