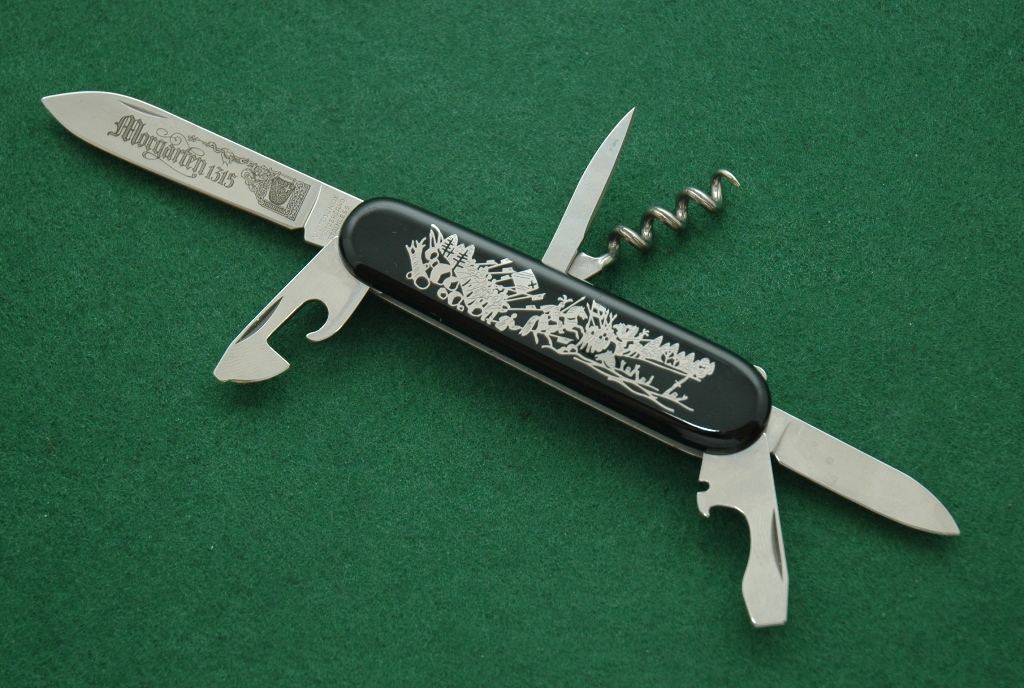 The Victorinox Battle of Morgarten is a special collector's 91mm Swiss Army Knife released in 1983, with a tool configuration very close to the Standard or current day Spartan model.

This model was the first member of the Swiss Battle Series, all of which featured a large intricate silver battle scene inlay on the top scale, and a detailed laser engraving on the main blade.
The series was released to commemorate the battles and alliances that gave birth to the nation of Switzerland.

The main blade is etched with Morgarten 1315 and the crest of the canton of Schwyz, where the battle was fought.

The tweezers were omitted on all of the Battle Series models to allow the entire scale to be used for the battle inlay.
Versions are known to exist with and without the:

Released in 1983 to commemorate the Battle of Morgarten in 1315, and to honour the canton of Schwyz.
The scene inlaid on the top scale shows the Swiss on the left, carrying the banner of the canton of Schwyz, and the Austrian knights on the right, hemmed at a narrow pass at Morgarten, in between the mountains and Lake Ageri, and being pushed into the lake. Shown on the left are the boulders and tree trunks that were hurled down at the Austrians before the start of the fighting.

This model came in a black wooden presentation box, which contained a serialised certificate of authenticity, with the serial number matching the liner inscription. There was also a booklet containing a brief description of Battle of Morgarten and also a history of Victorinox in German, English, and French, however this was only present in the Battle Series Collection presentation case.