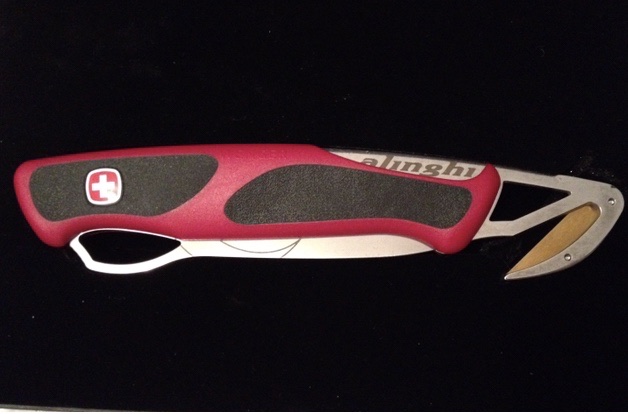 The Wenger Alinghi Rescue Knife (aka the 'Alinghi Strap Cutter') is a very unusual single-layer Swiss Army Knife, not available to the general public. It features a unique strap-cutter blade built into the frame of the knife, a regular one-handed blade and no other tools.

This model was developed in cooperation with the Switzerland based Alinghi Sailing Race Team, along with the other models in the Alinghi Series. A knife was issued to Alinghi team members so that they could overcome the potential nightmare scenario of getting caught in the catamaran’s nylon webbing if the boat capsized.
According to information received from a respected member of Multitool.org, this model was also available for purchase during Alingni events.

It is understood that around 500 pieces of this model were made.

Alinghi lettering is etched into the knife frame

This model features Wenger’s patented Evolution Grip contoured handles with black rubber inserts. One side carries the Wenger cross logo, which is a push button, which, when depressed, releases the liner-lock on the knife blade.

There were three generally available 130mm models in the Alinghi series, all featuring an Alinghi etched serrated blade, pliers, a marlinspike and additional tools depending on the model. See the Alinghi Series page and individual model pages for full details of the series and other models.