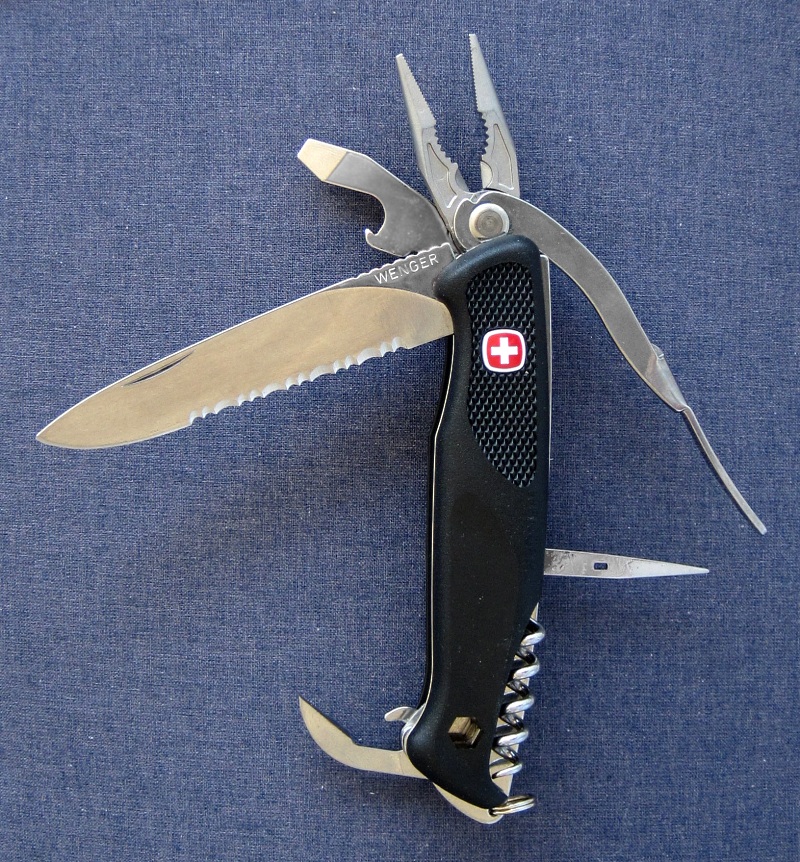 The Wenger Ranger 174 was originally known as the Touring model.
It was one of the first landmark models in what was originally known as New Ranger series, featuring both folding pliers, and a standard ¼" bit-driver incorporated into the handles/frame of the knife. These are significant and unique Wenger tools that defined the 130mm Ranger Series.
The folding plier mechanism narrowed the gap between the original multi-tool (ie the Swiss Army Knife!) and the more recent plier-type multitools introduced by other manufacturers.
The New Ranger series of models featured a locking main blade employing a liner-lock mechanism.

Discontinued - But available as a Victorinox Delémont.

The flathead screwdriver features an automatic locking-system that locks the screwdriver open when pressure is applied.

There is a hexagonal hole for the bit driver in the scale which also goes through several backsprings for support, one of the backsprings provides spring tension to keep the bit in place. The bit-driver accepts standard ¼" screwdriver bits. Two are supplied with this model - one small flat and one large Phillips.

Evolution contoured Nylon scales. These are most commonly available in black. Deep checkering is molded into the thumb area on both sides, for increased grip. One side carries the Wenger cross logo, along with WENGER  molded into the scales. The cross logo is a push button, which, when depressed, releases the liner lock on the knife blade.
The original version of this model also includes a white printed mountains icon on the top scale which represents Touring.
Later available with RangerGrip scales.

Initially released as the Patrouille de Glaciers model. Later versions did not include the mountains icon on the scales.