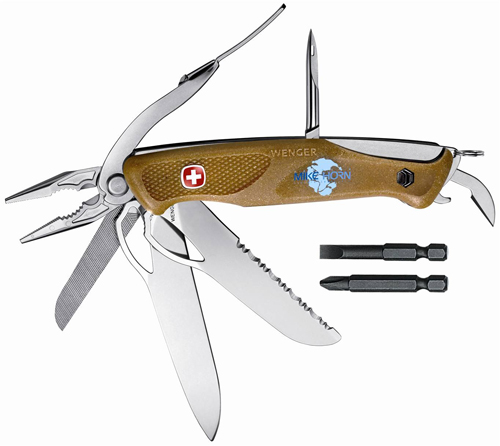 The Wenger Mike Horn Ranger is a 130mm model with four layers, designed with, and named after, the world renowned explorer Mike Horn.
This large knife contains a somewhat unusual tool configuration, which includes two large one-handed-opening knife blades, and a custom awl. The handles (scales) were made from a new formula composite material and have a distinct color and feel. The composite was made from recycled materials, and is itself recyclable.

The scales are a manufactured from a new composite material that consists partially of wood fiber, and were designed to be 100% recyclable.
The scales contain the blade lock release button (Wenger logo), and have the Mike Horn Pangaea logo imprinted.
The scales also have a ¼" hex shaped hole near the tail end which is part of the hex bit-driver incorporated into the frame and scales of the knife.

This model was introduced in December 2009, and according to Wenger, was v1.2, with earlier versions being tested by Mike Horn.
The Mike Horn Pangaea logo represents his project to create environmental awareness and education regarding the world's natural resources, and to create an environment for discussion and actions on their preservation for future generations.

The circular reamer debuted on this model, and as a result is sometimes referred to as the Mike Horn Reamer (MHR).
The short stainless-steel cut metal file/saw, and the modified sheepsfoot style one-handed opening blade were also introduced with this model.

This model was retired in 2013, it was not one of the models converted to be a Victorinox Delémont.