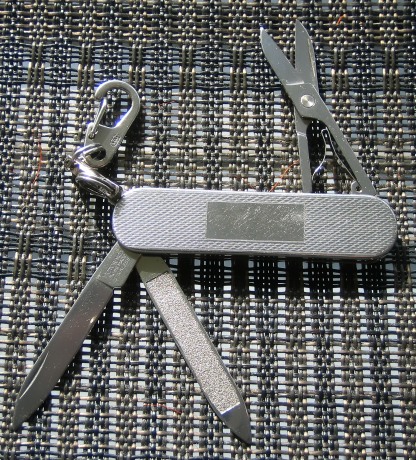 The Broker is a relatively uncommon 58mm Victorinox knife. It is very closely related to the well known Classic, but it has a very different appearance. The Broker has machined (or turned) Stainless Steel scales, without the Toothpick or Tweezer tools, and is one of the thinnest Swiss Army Knives. The Broker is very similar to the Ensign which does not have a keyring. Although reported to be discontinued, it is still (2008) available for purchase from several vendors.

Stainless Steel - It is only available in a grey/silver steel color, but different machined engraved patterns were produced. Some versions have an engraving panel; a small smooth area on one side of the scales.

The Broker was likely first released in 198n? (the Broker is shown in SAB 1985 catalog). It is now retired, but it is not known when it was officially retired.