Discontinued - But still available as a Delémont - See History. 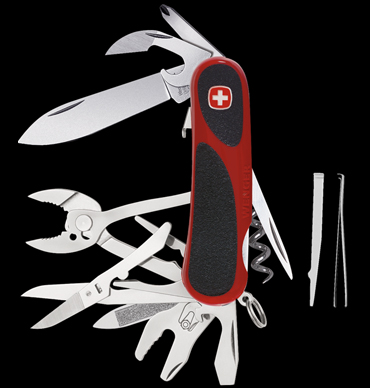 The Exclusivities model (1.557.59.399) has two different scales: Translucent red on the front, with EXCLUSIVITIES imprinted in white ; EvoGrip on the back, with www.wenger.ch laser etched into the larger rubber grip pad.
This model appears in the Wenger 2011 Displays, Print, and Merchandising Material dealer's catalog and is listed as the "Exclusivities Swiss Army Knife for Demonstrations".

First introduced in 2006 with the standard Evolution scales. The EVOGrip version was introduced 2007, the EvoWood version in 2010.
When the Wenger knives were discontinued in 2013, the model featured in Wenger's farewell United Woods limited edition boxed set.
From 2014 Victorinox decided to continue manufacturing the S557 model as part of the Delémont range.