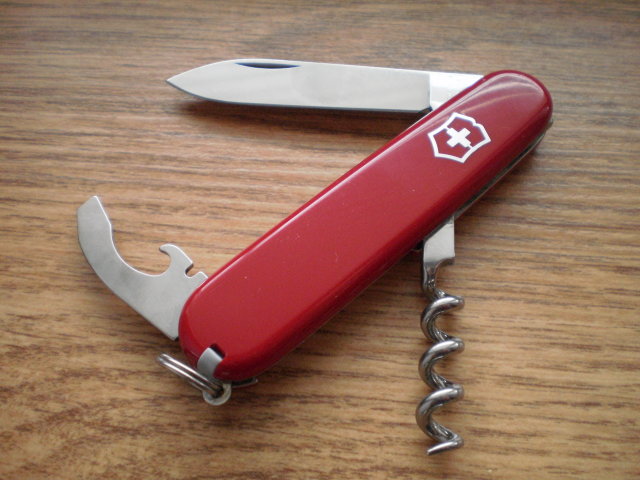 The Victorinox Waiter is an 84mm Swiss Army Knife, that was also known as the Victorinox Bartender in some markets. Beverage containers beware!
Although this model has one of the more minimal tool sets of the Victorinox models, with only a single layer of tools, it offers many functions and is very popular as a very practical configuration for a minimalist pocket knife and for travel.

The Waiter comes with standard red Cellidor scales. Other colours may also be available.

The original Waiter was an Alox handled model without the corkscrew (Model: 0.1300.26 - Silver ribbed Alox), and featured a standard cap-lifter, rather than the combo-opener tool. This model was originally identified with model numbers 2230r+ (red) and 2230s+ (silver). It is now generally referred to as an early version of the Alox Bantam, as the model was renamed after the cap-lifter was replaced with the combo-opener tool.
Early Cellidor models came with a grooved corkscrew.
Even older (Victoria) versions were known as model no. 247k.
The Waiter has also been known as the Bartender.

Available with, or without, a key-ring