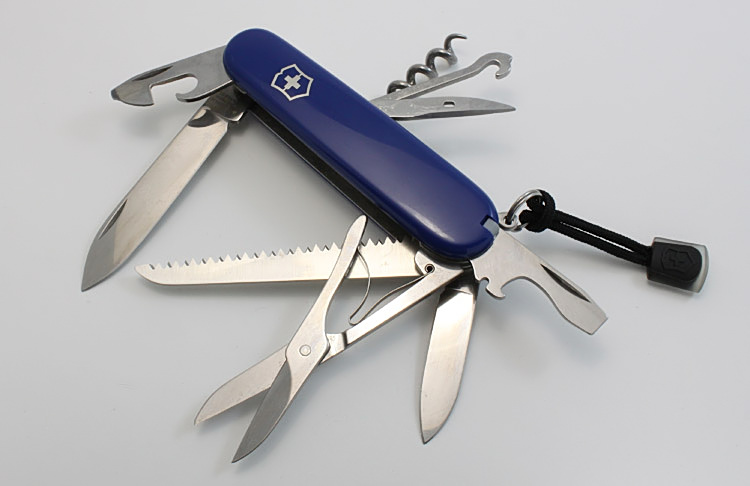 The Victorinox Huntsman is a popular choice among the different four layer models and 91mm sized knives overall. The wood saw and scissors combined with the two standard knife blades and openers, equips the Huntsman with the most popular tools and the ability to handle most cutting chores.
This tool configuration has been manufactured in different forms and sizes for several decades. Historically, a similar tool configuration used the Woodsman name.

The Rainier model/variation was a Huntsman with a partially serrated blade (See Variations below) - This model is no longer available. 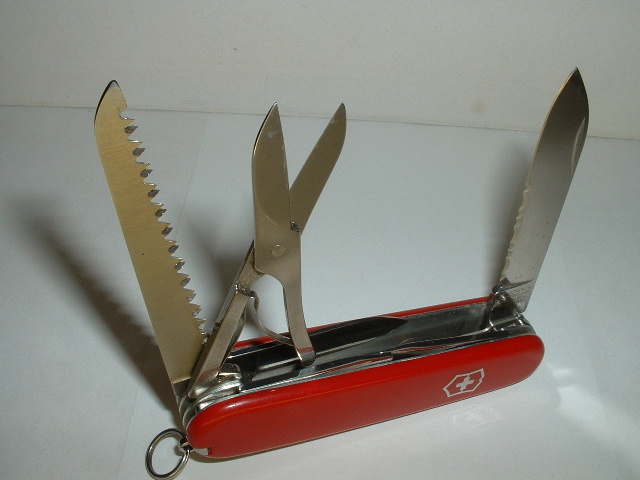 Rainier model/variation with a 60% serrated blade

Red and black Cellidor scales are fairly standard. Ruby, sapphire, and later SilverTech were also available. Camouflage scales are also available in either Shadow Grass or New Breakup patterns. Available sometimes in the US with Stayglow scales that have been added as a modification, or the knife was imported. As with most models other colors may be available from time to time, or in specific markets.

The Woodsman was a much earlier model with the same basic toolset, but omitting the toothpick and tweezers and also the long nail file which were all installed on the Huntsman at that time. (Note: The name 'Woodsman' has been used for several different configurations).

Being in production for a number of decades, the Huntsman has undergone quite a few changes over the years. Very early models with the same basic tool configuration can be found with the exposed riveted construction, the original awl, and later, the long nail file on the back.
Over the years several changes have been made to the saw, corkscrew and scissors. Prior to 1991 the Huntsman, like other models, did not include the multipurpose hook.